In 2002 the European Union got under way the project known as EUMORPHIA (European Union Mouse Research for Public Health and Industrial Applications) with the main aim of developing standard procedures for improving the phenotypic characterisation of genetically modified mice, and the identification of animal models for studying genetically-based human diseases. This project has generated a “route map” for phenotyping and an extensive catalogue of standard and validated procedures (Standard Operative Procedures, SOPs) for functional assessment. The following diagram shows the main initiatives stemming from EUMORPHIA. 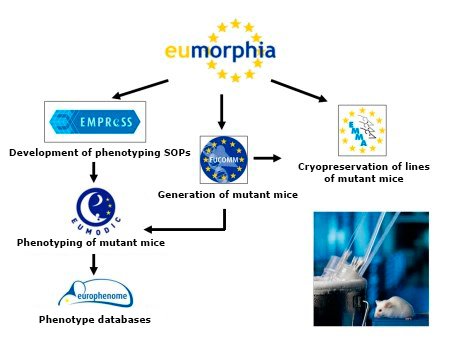 When the EUMORPHIA was completed, in 2006 work went on with EUMODIC intended for phenotyping lines of transgenic mice generated by mutating each and all of the genes of the mouse genome, by large-scale application of the aforementioned standard procedures. This initiative entailed the creation of large installations engaged in primary level phenotyping (Phase or “pipeline” I) of mice, what are known as “Mouse Clinics”, such as Institut Clinique de la Souris, German Mouse Clinic, Mary Lyon Centre and WellCome Trust Sanger Institute, associated with teams specialising in generating transgenic mice. In the future, Spain will also have a similar centre in Barcelona (CBATEGT-Mouse Clinic). The purpose of these centres is to perform a first functional approach, primary phenotyping, to identify possible alterations by combining different simple in vivo assessment tests and pathological anatomy.

The secondary phenotyping is carried out in a wider network of centres with groups specialising in specific areas, which carry out on demand more complex tests on a lower number of animals which have displayed interesting phenotypes after primary screening (Phases II and III).